LONDON/BRUSSELS; 3 April 2020: A spokesperson of Organisation of Kashmir Coalition (OKC) has indicated that the Executive Members of OKC Barrister A Majid Tramboo and Prof Nazir A Shawl have forwarded a communication to the Secretary General of the United Nations Mr António Guterres urging upon him to intervene in the critical situation of Indian Occupied Jammu and Kashmir (IOJK) that is rapidly developing on account of Pandemic Covid-19. Barrister Tramboo and Prof Shawl have expressed their utter anguish and shock about the Government of India’s (GoI) continued unlawful actions in IOJK in these extra-ordinary times (there being practically global lockdown) when the world is engaged in fighting Coronavirus and attempting to save lives and humanity.

The spokesperson highlighted the salient points of the OKC’s communication to the Secretary General which are articulated below:

“- Despite the wake of the live threat of COVID-19, thousands of Kashmiris (men, women and children) are huddled in jails in very appalling conditions; there exists no access to WHO and the RED CROSS either to IAJK or any prisons in India or IAJK;
– The Kashmiri leadership continue to be imprisoned either in various jails of India/IAJK including the infamous Tihar Jail at New Delhi or in their homes; the GoI has announced to commence trumped criminal trials against some of the Kashmiri leaders including Mohmmad Yasin Malik, chairman Jammu Kashmir Liberation front; Syed Ali Shah Gilani, Chairman All Parties Hurriyat Conference(G) is seriously unwell but imprisoned; as well as Mian Abdul Qayoom, president Kashmir Bar Association detained at the Tihar Jail including Shabir Ahmed Shah (prisoner of conscience declared by Amnesty International), President, Jammu and Kashmir Democratic Freedom Party and Farooq Ahmed Dar, Chairman Jammu Kashmir Liberation Front(R); and Mirwaiz Umer Farooq, Chairman All Parties Hurriyat Conference(M), detained at his home but prevented to have any contact with the – Unbelievably, the GOI has commenced the process of demographic change in IAJK by issuing a gazetted notification under Section 3A of the J&K Reorganisation (Adaptation of State Laws) Order 2020 through which a person is deemed domiciled in IAJK who has resided there for a period of 15 years or has studied there for a period of 7 years; this domicile purported regulation shall apply to “children of those central government officials, all India services officers, officials of PSUs and autonomous body of central government, public sector banks, officials of statutory bodies, officials of central universities and recognised research institutes of central government who have served in Jammu and Kashmir for a total period of ten years or children on parents who fulfil any of the conditions in sections.””

The Spokesperson stated that Barrister Tramboo and Prof Shawl have termed the above actions of the GoI absolutely contrary to and in breach of International Laws and Humanitarian Laws including the treaties and conventions to which India is signatory. The Secretary General of the United Nations has been urged to ensure access of the International Red Cross to IOJK and to all the prisons where Kashmiri Prisoners are being held.

U chief welcomes ceasefire announcement between Israel and Hamas 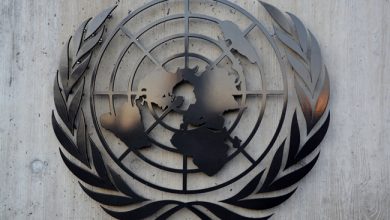