Srinagar: Jammu and Kashmir National Front while voicing its serious concerns over the continued bloodshed, violence and killing of innocent civilians at the hands of Indian occupation forces has said that India’s apartheid regime led by Modi has turned Kashmir into a killing field.

In a statement issued here on Thursday the JKNF spokesman Shafiq-ur-Rehman said that the innocent people were being killed day in and day out by the Indian secret agencies and then lay blame squarely on unknown and identified gunmen in order to evade further investigations.

Terming the recent killing of a well–known chemist, Makhan Lal Bindroo as a handiwork of the agencies the spokesman said that since 1990 Indian secret agencies have been found involved in such kind of vicious activities intended to sow the seeds of discard amongst the Muslims and Kashmiri Pandits who have a history of living in peace and harmony since ages. Murder of Bindroo, he said, was part of the communal government’s sinister design to create a wedge between the Muslim Majority and other minority communities. Demanding an independent international probe into the incident, the spokesman said that the Indian government should allow a fair investigation to bring culprits to justice.

Meanwhile, the spokesman expressed its grave concern over the continued search and cordon operations by the Indian occupation forces in length and breadth of the Kashmir valley. Referring to search and cordon operations being carried out in different areas of the Kashmir valley including Srinagar, Shopian, Bandipore and Kupwara districts said that occupation forces were using CASO to terrorize innocent and hapless civilians in particular the women and children who he said have been worst victims of the state-sponsored terrorism over the past several years. 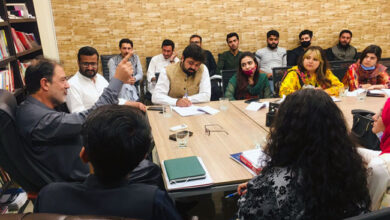